Traverse Fifty – A year in words 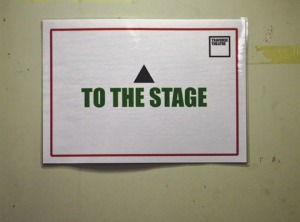 It all began with an email sent to me by several of my friends and family in late 2012. The email said that the Traverse Theatre in Edinburgh was looking for fifty writers for a year-long attachment to celebrate the theatre’s fiftieth year. I immediately sat down to write my application: the Traverse has always been special to me as they staged my first ever play in 1994 (part of Class Act), gave me a work experience placement on David Greig’s Europe that same year, and latterly included me in their Young Writers’ Group. The brief was a 500 word Play for Edinburgh. I’m from Edinburgh, I thought to myself, how hard can it be to write a play about it?

As it turned out – hard! I moved away from Edinburgh in 1998, so I wondered if I still had anything relevant to say about my city. Also, writing a 500 word play is more difficult than it sounds…

I settled on an idea I had during a fleeting conversation with my sister and brother-in-law a few months earlier. What if Leith decided to become independent from Edinburgh again, as it had been until 1920? If it did, how would it work, and would the boundary be in the same place it used to be?

The play was finished, and after showing it to my writing partner I felt it was good enough to submit and nervously sent it on 25th October. I waited, and then in early December I got the call: would I like to be part of the Traverse Fifty? I was over the moon, and particularly because the first official event would be the staging of all fifty Plays for Edinburgh on the 26th January in Traverse One! That was to be followed by a programme of monthly workshops, a variety of writing projects, and culminate in the theatre awarding commissions at the end of the year. 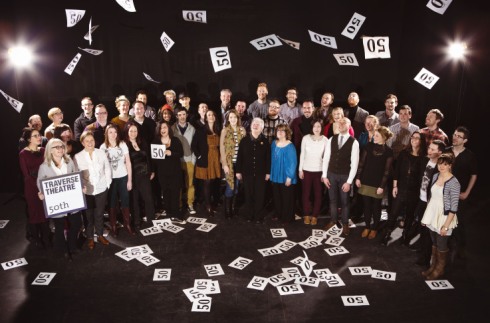 January 2013 was a busy month: the official launch was on the 14th, followed by the performances just over a week later which had proved so popular at the box office that the theatre had to add a second show on the 25th! On the 26th we had a photo call which included almost all of the fifty, and then I got to see my little play The Boundary in the main space performed by a fabulous company of actors and directed by Hamish Pirie. I was so pleased, and then had the added joy of a nice mention in Joyce McMillan’s review of the night a few days later:

“I loved Deborah Klayman’s Boundary, which brought images of cities divided by war home to the urban boundary between Edinburgh and Leith.”

Every month I travelled home to Edinburgh for workshops with some of Scotland and the UK’s top playwrights and directors including Tim Price, Zinnie Harris, Iain Finlay Macleod, Ben Harrison, Steven Canny, and David Grieg. There were helpful networking events with theatres, theatre companies and emerging directors; as well as sessions and one-to-ones with Traverse Artistic Director Orla O’Loughlin and Associate Director Hamish Pirie. Sometimes this also included complimentary tickets for performances at the theatre, and in addition to our own work we were able to see both Rob Drummond’s Quiz Show and David Harrower’s Ciara before Q&A’s with the cast.

There were lots of events and deadlines to work towards: Scratch the Fifty, 20 Minute Plays, and the autumn New Writing Festival to name a few. For each we were given a brief, submitted our work, and crossed our fingers that we would be selected.

Meanwhile, the London-based writers put together our own scratch night in Camden, with a wonderful cast and dedicated directors taking on six of our scripts for a rehearsed reading for the invited audience. My play Para was one of those staged, and I was delighted with Sarah Davies’ direction and the brilliant actors’ performances. I even had a chance to lend my acting talents to the day, performing in Helen Shutt’s Birdwatching and James Green’s Natural Break. 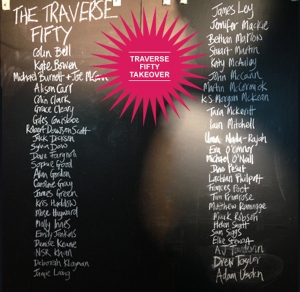 As part of the theatre’s autumn new writing festival we were invited to submit audio and ‘hidden’ plays for the Traverse Fifty Takeover – Write Here 2013. My audio play Civil was selected, and also my monologue play Lock Up Your Sons, which was distributed in sections around the theatre for the audience to find. Other plays were chalked on blackboards, and written on toilet walls, mirrors and hand towels. Justine Blundell was so impressed she gave the event a five-star review:

*****  “an extraordinary celebration of new writing”

As an added bonus, the Traverse teamed up with Writer Pictures pairing each of us with a photographer based near us who would take a portrait of us to be displayed as part of an exhibition towards the end of the year. My photographer was the charismatic and dynamic Alan Gignoux, who came up with a concept based on The Boundary that had me drawing lines, boxes and text with lights against a dark background. Alan provided me with several excellent photos to choose from, initially intending them as a montage, but in the end we selected the following photo as it captured the essence of my work: plays about social justice where the text was more prominent than the writer.

As the year drew to a close, the theatre arranged two further workshop days. The first was “Surprise Surprise” with Hamish Pirie followed by a networking event with the Traverse emerging Directors. The last was a jam-packed day: a workshop with David Greig in the morning followed by a performance of Ciara and a post show discussion with its star, Blythe Duff, director Orla O’Loughlin and assistant director Emily Reutlinger. After that there were Christmas drinks in the bar with some lovely speeches and a chance to see the Writer Pictures exhibition, which looked so brilliant in the bar area that it has been left up until the end of the year!

Overall it has been an amazing year – I have met so many fabulous and talented people from all disciplines and, importantly, I feel I have really developed as a playwright thanks to all of the support and resources that have been made available to us.  It is a pity that the year with the Traverse had to end, but I am continuing to develop The Boundary into a full length play, and look forward to seeing it staged in 2014.

Deborah trained at Drama Studio London and is co-founder of Whoop 'n' Wail Theatre Company. She is an actress, musician and voice artist represented by Nelson Browne Management Ltd. As an actor, Deborah has performed in the UK and overseas in a variety of theatre and film roles. She is also a talented cellist, singer and voice artist. Deborah was one of the Traverse Fifty playwrights, and won the Cambridge University Press "Channel The Bard" competition for My Bloody Laundrette, which she co-authored with Whoop 'n' Wail co-founder Ali Kemp. Ali & Deborah are Associate Performers at the Old Diorama Arts Centre in London. Their new full-length play, But For Us, is currently in development. END_OF_DOCUMENT_TOKEN_TO_BE_REPLACED
This entry was posted on Saturday, December 14th, 2013 at 23:44 and posted in Thoughts. You can follow any responses to this entry through the RSS 2.0 feed.
« Othello is landing in London!
Hedda Gabler – The Beginning »