Stalking – how far is too far?

As most people who know me personally can attest, I appear to be somewhat of a magnet for stalkers. In my relatively short life I have had a range of unwanted attention: this does not make me unusual, most of my female friends (and a large percentage of the men) have experienced someone who is persistent beyond the point of flattery. The question is, where is that line? When does ‘pursuing’ someone you like and are perhaps romantically interested in cross the proverbial line, and who decides where that line is?

It is a difficult question. If someone were to physically assault you, or to openly advance on you in a way you found threatening, that would seem clear cut (and awful). However it is in the realm of persistent but non-physical harassment that it all gets a bit murky.

If someone repeatedly asks you out, even when you continually say no, is that harassment? It is unwanted attention, and it can be uncomfortable, but does it cross the line? If someone emails you a few times, repeatedly asks friends and colleagues about you, is that stalking?

For me, the key word has been ‘repeatedly’. It is this persistence, this inability to hear the word “no” and accept it that makes these unwanted advances in to something more oppressive.

In my time I have had the phone stalker (repeated unwanted calls) who used to trouble my poor mother in the days before mobile phones, and who sometimes turned up outside my school. I was sixteen and had met him in a nightclub but then decided he wasn’t for me and started dating someone else. Luckily that was short lived, and young as I was it didn’t really strike me as more than a guy who really fancied me trying his luck. However, when I banged into him years later he approached me again to apologise and tell me he had been in a bad place back then. I was somewhat impressed by the apology, but less so with the fact he then asked if he could maybe have my number…

When I was eighteen I worked in a pub and was advanced on by a guy 20 years older than me who also worked there weekly playing guitar. It turned rather nasty and he tried to smash the windows of the pub after he was rebuffed. Unbeknownst to me he had already managed to get my (landline – still no mobiles!) number from a friend under false pretenses, so after that called me at the home I shared with my then boyfriend. Going to work was frightening in case he turned up, I stopped answering the phone at home, and left working the pub soon after.

Then there was the stalker-ex. A break up was followed by 3 months of silence followed by 3 months of persistent calls, emails, and the odd threat to turn up at my house. This was irritating rather than frightening, but I still dreaded opening my inbox in case I had another email from him as I couldn’t help but read them. After a distressing one where he said he had made an attempt on his life I deleted and blocked his email and thankfully have heard nothing since.

Finally, there has been the stalker-colleague. For the last 3 years I have been subjected to persistent and extremely unwanted attention from a man I work with in the form of emails, face-to-face contact, unwanted gifts and cards, and on one occasion him turning up at a theatre I was working at. I had a fantastically supportive boss throughout which enabled me to deal with it in the way I chose, which rightly or wrongly was informally. I truly felt, knowing this individual, that the obsession would abate if someone in authority set him straight, and after intervention by my manager and his things improved. Although I had nightmares about him, and dreaded going in to work for a time, I felt empowered by the fact I was dealing with the situation on my terms. Things improved significantly over the last year, however recently he has made another attempt to make contact with me entirely outside of the shared work environment and I have now had to deal with it another, more official way. 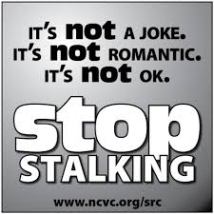 Things that made these incidents more or less tolerable were, without doubt, being believed and supported. My pub manager did not want to bar the man who posed me such a threat (until he tried to damage property), and ultimately I left that place of work. My recent troubles were made manageable by my understanding boss – but more difficult by colleagues who did not see the seriousness of the situation and often found it rather funny. Cries of “hey, here comes your boyfriend!” as the man who was harassing me approached my work station did nothing to diminish the problem, but did a lot to reduce my feeling that I was right to be distressed. I’m sad to say it was generally a male/female divide: the guys told me not to worry, this guy wouldn’t hurt me; the girls recounted their own experiences of stalking and/or harassment. 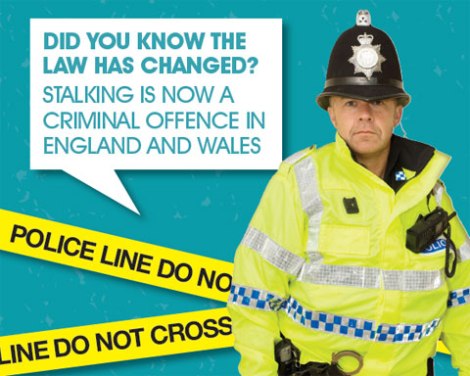 It wasn’t until November 2012 that the law was changed in England and Wales to make stalking a specific offence for the first time. Scotland was a little ahead of the game, criminalising Stalking in April 2010. Baffling, but bear in mind spousal rape didn’t officially become a crime until 1991 (1982 in Scotland)…

That aside, better late than never, and I can say from first hand experience the Police do take stalking seriously, and more importantly now have the legal infrastructure behind them to do something about it. Please don’t feel you won’t be believed – you will be. Report it. If not to the Police, confide in someone you trust, and keep a diary of events, however innocuous they may seem. Once I put 3 years worth of ‘little things’ and ‘minor incidents’ on paper it not only filled three full A4 pages (small font!) but it became clear to me that this was not just an irritation, not just something bothersome that felt a bit uncomfortable: I was being stalked. I had always assumed, and still feel, I was not in physical danger so never felt it was appropriate to report it as I felt I was perhaps being a little dramatic – a classic ‘hysterical woman’. This could not be further from the truth – what I have tolerated is more than anyone should ever have to endure from someone that supposedly ‘loves’ or ‘cares’ for you, and ultimately we never know what someone else is capable of, particularly if they are already deluded as to their relationship with you.

Of course, in the grand scheme of things I feel lucky – this has encroached on my life and thoughts for the last 3 years, however I have never felt that I am at risk of physical violence and thankfully this man has never had my home address or phone number. My heart goes out to women and men who have been stalked in a far more aggressive manner than I have, because if what happened to me felt that overwhelming at times I hate to imagine if it were also literally following you home.

Websites such as 192.com make it easier and easier for stalkers to find your personal information. It is just one of many websites that provide personal information, usually for a fee. They get their information from the Electoral Roll, Telephone Directories and Companies House and offer it for sale unless you opt out of their service (one you never asked for and likely don’t know you are on). Fortunately for me I realised this a few years ago and had my details removed – something I am hugely grateful for as otherwise I might well have had first-hand experience of the home stalker. I would personally recommend to everyone that they request their details be removed from the site, and also that you remember to check the ‘opt out’ box on your Electoral Roll Form as otherwise they have the right to sell your information to websites and companies such as 192.com.

Another concern is social media: Facebook has improved but you still have to be careful about your privacy settings and letting ‘friends of friends’ have access to your page. Twitter is more difficult as it is essentially public domain so you have no control over who sees your posts. If in doubt, go for the highest privacy setting or disable your account and report it if you feel you are being targeted through the site. People joke about ‘Facebook stalking’ someone, but the reality for a lot of people who have experienced it is far from humorous.

Ultimately, you decide how far is too far. Any behaviour that makes you fearful or anxious, that encroaches on your life or makes you uncomfortable should be challenged – not necessarily directly as that can potentially escalate the situation, but perhaps through a trusted third party, manager, or the police. If someone knows where you live, please please call the police, even if you know the person and think they pose you no threat. Everyone deserves to feel safe at work and at home, and that includes you. You did not cause or encourage this behaviour, so don’t let self-blaming put your safety at risk.

I have included several links to UK websites on this post (click on the images), but if you are from another country the same services are hopefully available. The 24th April 2014 is National Stalking Awareness Day in the UK, and if you or someone you know is being subjected to this treatment please do contact one of the helplines or charities to get some support and advice.

Obviously, if my stalker is reading this: you know who you are. Stop. Imagine someone was doing this to your mother. Stop.